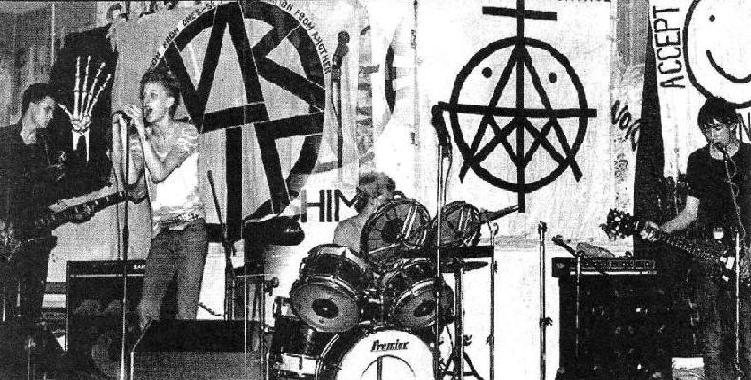 Alongside Reality Control, their good friends Blood Robots began life around early 1982. Founding members Sned and Hec(guitars and vocals/drums) were joined by Micky and Andy(vocals, bass) after placing an ad in a local record shop called Listen Ear. They were also a part of the Gateshead Music collective, which helped the bands practice, play gigs and to express themselves freely. The early days included dragging equipment down towns to gigs and struggling to find equipment. At one time, they had a member from Reality Control play bass for them temporarily. Before being in the Blood Robots, Sned and Hec used to be in a band called 'The Delicious Books' which began during March of 1981 until 1982 when The Blood Robots were born. 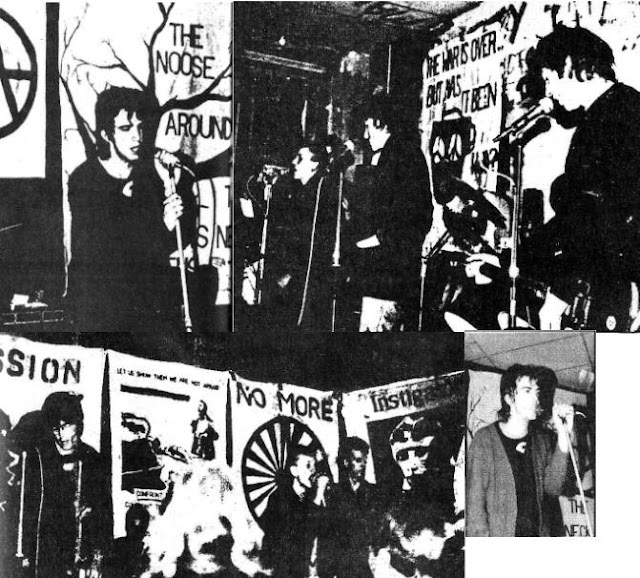 Their 'Blood Robots' was taken from the title of an album title by another band called The Androids of Mu. It reflects the way people are programmed by the media and are disciplined through school, etc. It was their view of the human race. Their first gig was at the city's Spectro Arts Centre during February of 1983 with Reality Control. Sned went to the same high school as Reality Control, and they ended up living in shared house set-ups and releasing music together until around 1986. They considered Reality Control a big influence on them, and saw themselves as their 'little brother band' even though they were two years older than them. 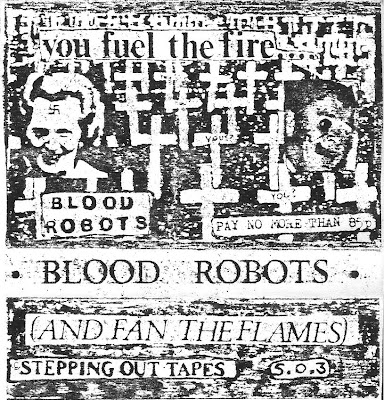 Blood Robots recorded their demo 'You fuel the fire and fan the flames' at the Spectro Arts Centre's eight-track studio during July of 1983. It was engineered by Micheal Barlow of Reality Control whom at the time worked at the studio. It was released on the Stepping Out Tapes label. 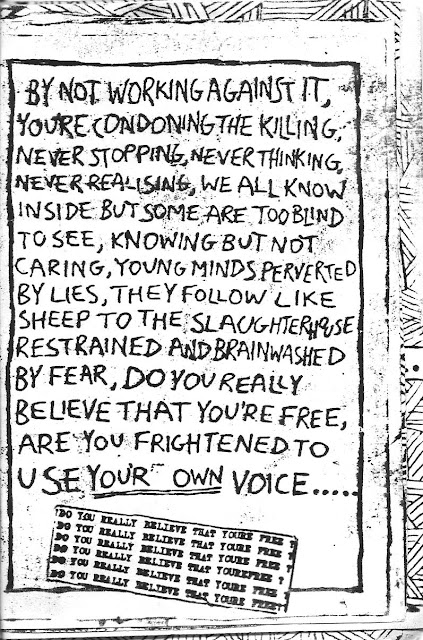 It consisted of six tracks, but other versions of the tape had a second set of tracks from a live gig that was different on certain cassettes. The tape sold very well at gigs, and the band began to gig more often, meeting such acts as Chumbawamba and Alternative. 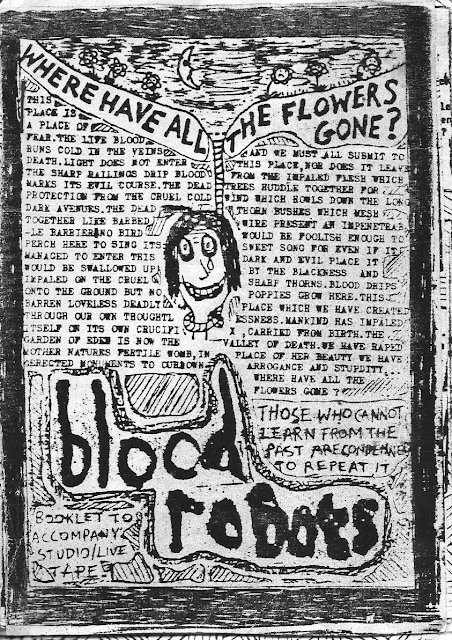 The tape showed their melodic style and great vocals. I noticed that if you slow down the song 'Poppies' it sounds like 'smoke in the water' by Deep Purple. The tape is accompanied by a booklet which contains the track lists and lyrics to all the songs in the demo and live recordings.

They added Richard as an additional vocalist in late 1983, but he left during the middle of 1984, crippling the Blood Robots set and forcing them to modify it. In 1984, they entered the same studio under Micheal Barlow, to release the split flexi-disc with Reality Control.

Unfortunately, Blood Robots split soon after the release, playing their last gig in August of 1984, alongside Famous Imposter, The Sears, Kulturkampf and Idiot Clone. Apparently it had something to do with Richards premature split and the rewriting of their material because of it. Hec joined Rhombus of Doom soon after, Sned and Micky formed Generic and founded Flat Earth records, and later formed One by One. Sned now plays drums for several bands such as War all the Time and Threads. Micky now plays guitar for Jinn. 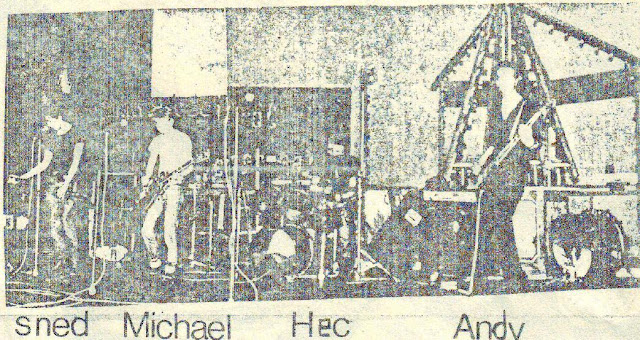 
Another rainy day, another dead soldier. Words cannot express the agony I feel. The pointless, helpless, hopeless lifelessness, The stench of death is growing stronger. The thin strand of light growing thinner still. I see the twisted and tortured. Despair in their eyes beckons me and I am useless. Let us preserve our sanity. And work for peace. Before we are drowned in this madness.


White crosses poc mark the battlefield. You fuel the fire and fan the flames. You started the conflagration in the British peoples names.

Grey scars detract from the landscape which once were rivers of blood. you worried about the damage to your equipment and not about human flesh and blood.

Beautiful green hills flank the valley. Cruise missiles are stationed there. Your minutemen and MX systems show retention of your powers, is that all you care?

All the animals are infertile. The grass, and trees, they have turned black. The beaches once were silica but now they're made of glass


Poetry competition its a challenge of entities. Wonderful prizes but too many entries. Obey, faultless loyalty. Pray, unquestioning devotion Say, of course we love you. Hate, not a notion. Effortless Loveless timeless helpless, 3 million unsuccessful enterants, your power base has been destroyed. Your citizens annoyed Channel their energies away in the poetry competition.


I have this man craving to be a terrorist,
gonna build an urban bomb factory,
put the neighborhood at risk,
I might buy an armalite or even a red eye
so I can shoot the army convoy as they pass by.

I might buy a tank or a submarine
and some tactical nuclear weapons for my back yard battlefield.

Ever since I was a boy, I've wanted to own a gun,
I think napalm is beautiful just like the golden sun.
I used to be a regular till I joined the S.A.S.
but the money wasn't good enough so now I'm a terrorist.

I have this mad craving to devour human meat,
better pray that you're not there when it's time to eat.


Overthrow any government as long as the price is right.
Overthrow any government that you don't like.
"Sorry to Spoil the Illusion but...."
A gunshot sounds off echoed walls.
In Northern Ireland another falls.
Lying face down in a pool of blood,
his shattered body silent in the mud.
his mothers weeping for him at home.
She's sitting crying all alone.
tears streaming down her cheeks.
It's been the same now for weeks.
Her husband died a year ago, in an accident in a motor car.
Now she's sitting all alone, weeping for her only son.
A letter comes, it's the news that she dreads.
They've turned off the life support, her son is dead.
She collapses in grief on the kitchen floor.
She keeps on crying till she can't anymore.
A single gunshot took his life.
It did more damage than any knife.
She looks at his photograph again,
and goes out into the pouring rain.
She goes to the cemetery twice a day.
She leaves fresh flowers on his grave.
She goes home and starts to cry.
She's proud he was a hero but why did he have to die?


I am alone and rotting.
The corpse of war consoled by a poppy.
A red bloom of death, the rape of a flower, the core of depravity.
You say you care.
You talk of victory
and history.
your vain shame.
poppies pontificate.


"The First Day of War - The Acceptance of Reality"


The horns of Jericho scream
as the walls fall down,
and they allow another guard
to take pleasure in his job.
Humanities crushed underfoot
as they encourage the master race.
The blood flows in muddy gutters.
Morality's not convenient today.

The little child screams in agony
as the rifle cracks back his skull.
Little whimpering child
cries no more and is silent and still.
Silenced by an angry guard
and the callousness of our leaders.
The slaughter continues and nobody really cares,

but soon war will come
and morality veils colonialism.
The acceptance of what they chose to ignore
is a magnanimous admission,
but only because it suits them
to disguise their warlike actions.
They knew before about the death camps
but only now exploit them.


Leaves in an Autumn storm fly high into the air.
Picked up by the wind and dispersed without a care.

The dove flutters helplessly
in a cold winter sky.
If summer doesn't come quickly,
then the dove will die.

Leaves are swirling very high
as they obscure the dove,
and for a minute they obscure
life's true perspective.