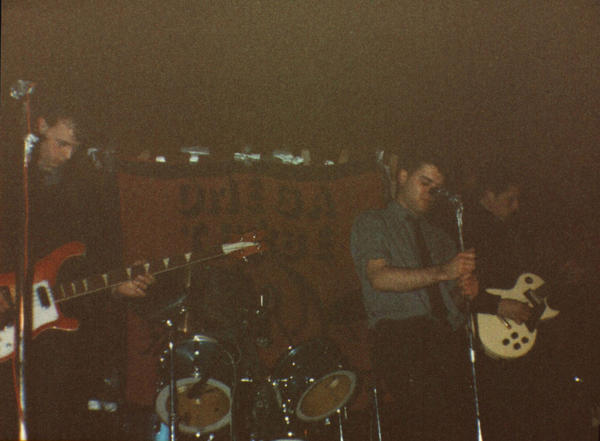 Never with a chorus in their songs, played music that several of their 'fellow' punk friends hated for not conforming, Lack of Knowledge were a unique band that did everything the way they wanted to, without ever selling out or doing what was expected from them as a band while throwing their own gigs to help boost the scene in their area. A lot of people don't seem to realize how hard it was back then for 'anarcho' bands to play gigs and to reach out their ideas to wider audiences. There were no computers(no email), no compact discs, no DVD's and no cellphones. Being a punk back then was dangerous and there were many risks. The only thing most of these bands had was John Peel. 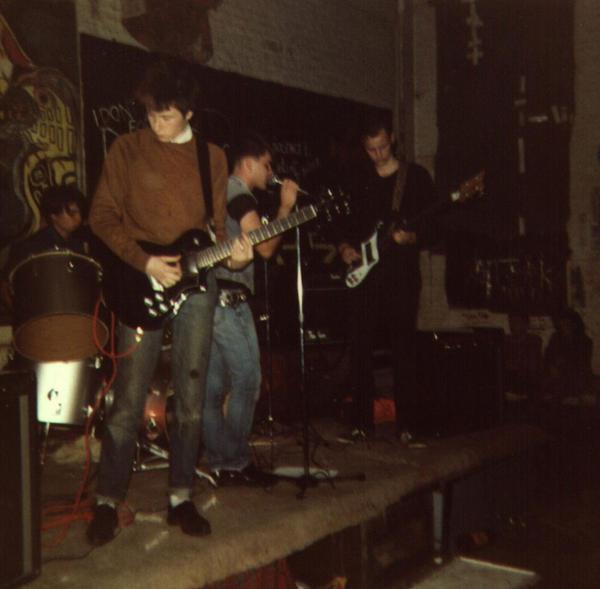 In 1977, Lack of Knowledge member Danny was already in another band named Headache, who had just released a single. His sixteen-year-old brother Bernard Wanted to form a band, so he bought a drum set. He got his old friends twelve-year-old brother Paul Stevens to play bass, and Paul himself brought along his friend fourteen-year-old Tony Barber on guitar. Both Tony and Paul had a guitar and bass, and Bernard had enough ideas to make songs so they were set. At this point, Bernard wrote the songs, while Paul and Tony played them as instrumentals. 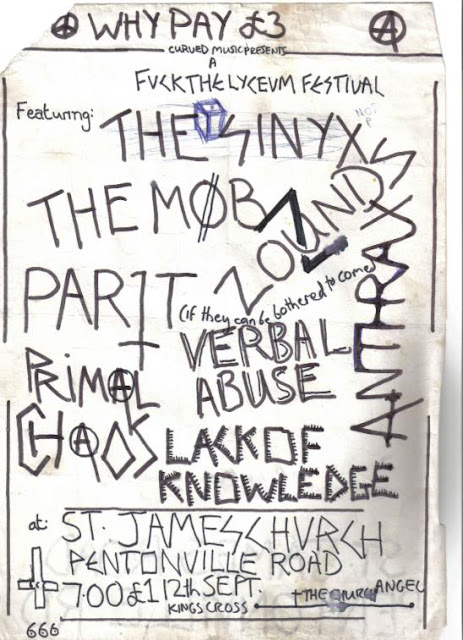 Rehearsals took place in Bernard's bedroom and some of the early songs were very experimental. During 1978, every rehearsal was taped into a portable mono cassette player and several D.I.Y. albums were made. One was called 'Lack of Knowledge; that Tony said in response to Bert's 'World of Knowledge' encyclopedias. In early 1979, Bernard left to join a 'real' band called The Position. Tony became rhythm guitarist for that band, but got kicked out for not showing up to rehearsals. 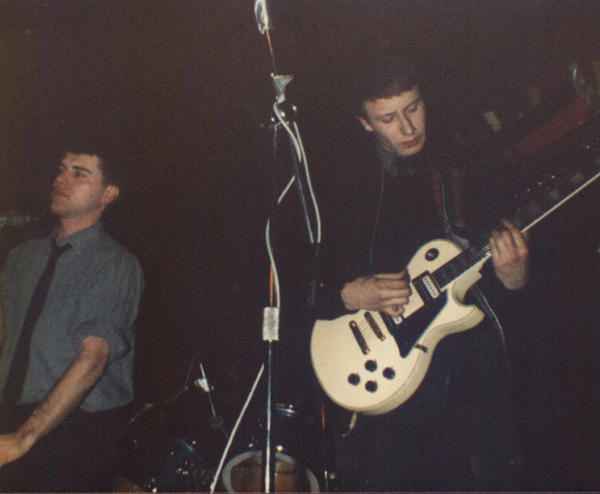 Paul and Tony then tried to carry on the old band and went through several line-up changes the next six months. They went through several band names also(at one gig they were called 'Assorted Tools'). They played another gig as 'Lack of Knowledge' but had no drummer. Another gig played by them was as a five-piece with Frank Hodgson on vocals, John 'Einstein' on drums and Danny Boyce(died a couple of years later from an accidental heroine overdose) on guitar. Tony and Paul decided to then record a couple of tracks as 'Trio of Testicles' instead of 'Lack of Kowledge' and sent a copy of them to Crass for the first Bullshit Detector, but they tracks never appeared again. 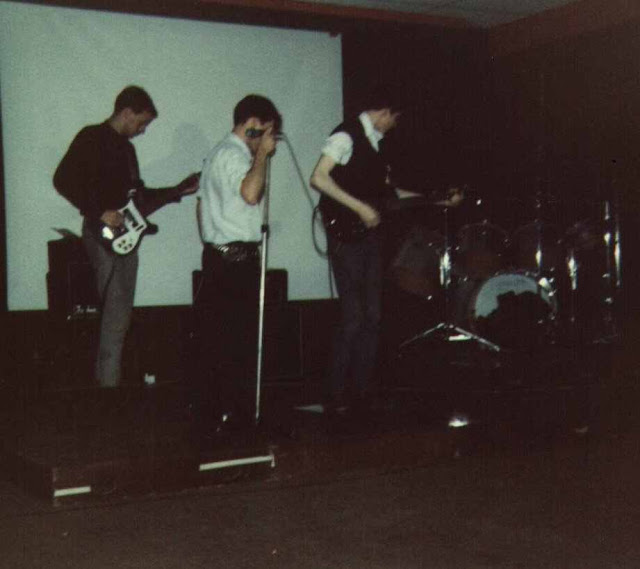 Now, Headache had split, and Danny decided to join in on vocals. This new version of Lack of Knowledge practiced every Saturday and wrote lots of songs right away. Their first gig with this line-up was at a friend's party with Bernard back on drums but only for that time. Frustrated with no steady drummer, the band decided to ask some random school kid if he would join the band. The kids name was Jason 'Chief' Powell, who had never played drums before in his life, but he agreed to jump in and learn as fast as he could. 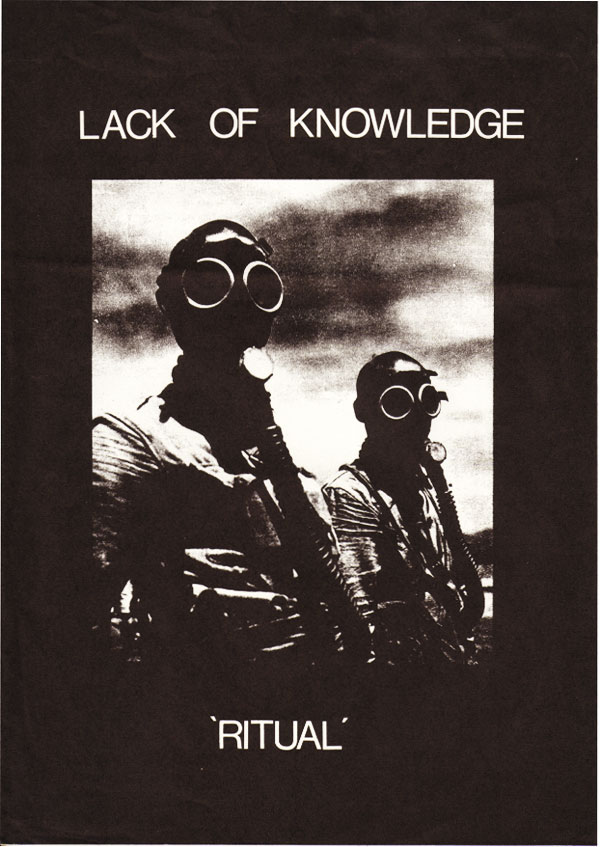 Within two months he became a decent drummer, and the official name for the band became 'Lack of Knowledge' and a completely new set was written. In March of 1981, the band recorded for the first time in a proper studio. They did not like the results, so they went to 'Octave Eletronics' to re-record it at a much more cheaper cost. They put it out as a 7" and got 500 pressed(back then, bands that refused to sell out had to make every single record and sleeves themselves if they were doing it on their own). they sent the singles everywhere, even giving one to John Peel so he could play it on his show. 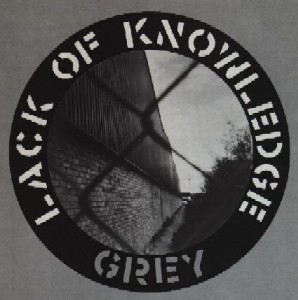 They also gave one to Penny Rimbaud of Crass directly at their house. He liked it so much that he decided to release the next Crass records release by them. It took a year to get to recording though, and by that time Chief had been kicked out and replaced with drummer Philip Barker who was a fan of Lack of Knowledge and member of another local band called Klee(he also drummed for this band and played one or two gigs with Lack of Knowledge). After several practice sessions at Danny's 'dad's garage('Waller Studios'), Lack of Knowledge went down to Southern to record the single. 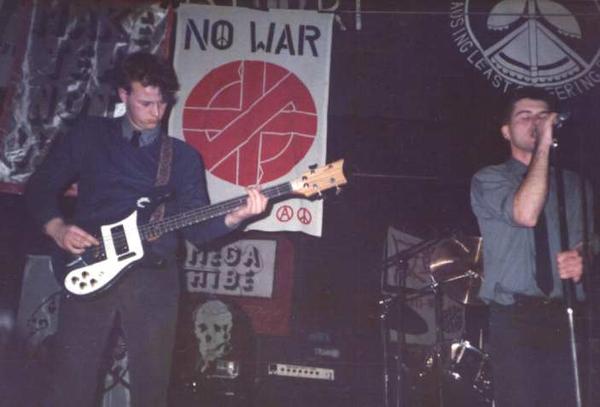 Shortly after playing their only gig with Crass(at the Zig Zag squat gig during December of 1982)The band recorded their 'Grey' E.P. in 1983. Lack of Knowledge didn't conform to anarchist ideas, or any kind of punk 'fashion', so they were hated by a lot of people. The band didn't care and went on to record 'the album' for Crass's Corpus Christi label. At that point Paul decided to leave, but not before helping with the album. 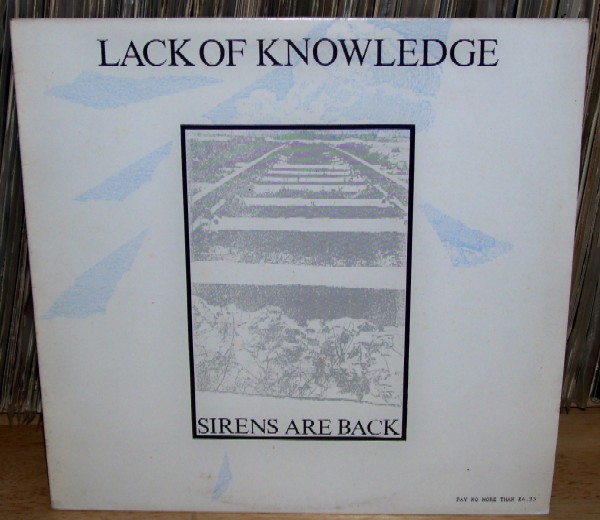 By 1984, their 'Sirens are Back' album(once the album was done Paul left) was released, and they had a new bassist(Karen, Tony's girlfriend) whom they were already practicing with. She had never played a bass in her life, but was forced to do so as quickly as possible.  Philips connections with a band called 'Living in Texas' who ran 'Chainsaw' records led to them releasing 'Sentinel' in 1985. In 1986, Lack of Knowledge played their last show in Colchester, which was he farthest they ever traveled for a gig. No one in the band remembers why they split, but it was right when they were ready to release another record. Recently, Lack of Knowledge have reformed and are playing gigs again and with releasing new recordings of old songs from the late seventies and eighties that were never recorded. 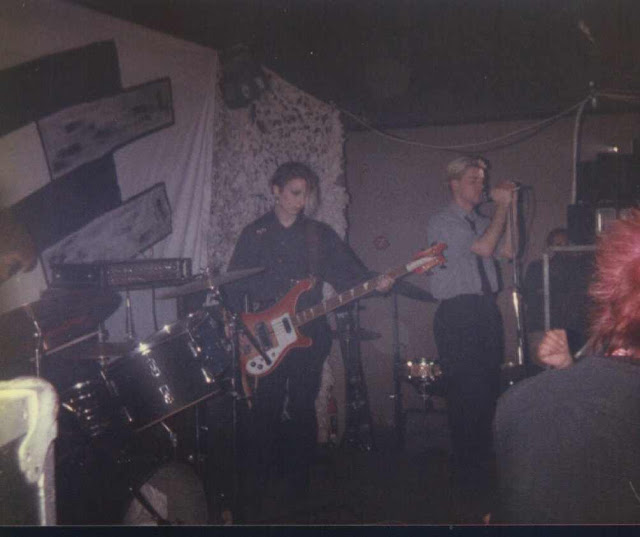 
In the corner of a burnt out building you sit with the
bomb. Don't sleep now it's almost time. Outside
snow begins to fall as the car turns the corner. A
figure rushes into the street clutching the deadly
symbol of freedom, lets lose the destruction made
of desperation.

The world explodes, bodies splatter.
The car twists and bursts into flames, splitting burning
debris in every direction. Screams and smoke rise-
the assassin staggers from the wreckage, his work
done - 'must hide'.

You move in shadow, the cold blue glow of a street in
winter, through the snow to the house of the inner
circle. You reach the door. 'Who is this?' - 'The
fugitive'.

Welcome 'This is just a beginning', he says,
but the rebels are betrayed. Doors burst open, and
machine gun death rains in on the conspirators. The
remaining few confess their crime and when justice
is done, die. But the hope lives on; they die but the
hope lives on.


The dying sun, red and swollen, goes down for the
final time in a blaze of glory. A symphony of colour.
Orange, red, green and violet dance across the
horizon, leaving a vast perfect skyline, a sad goodbye
to humanity.

Leaning over the balcony gazing at the
illuminated seascape, now devoid of it's once teeming
life, you wonder why you decided to stay.

Returning to the interior your cassette groans at it's
slow death, a dreadful parody of what once was
music fills the room and your mind, reminding you of
its former melody

Outside darkness is enveloping the
hemisphere, and cold moves forward covering land
and sea alike in ice. Huddled in the corner the last
thing you see is nothing. The last thing you hear is silence.


Girl in a mask outside the tank factory, riveted steel
rolling off the production floor. He loads the missile
bay, she works in the animal labs making cosmetics
safe for consumption. Waking home past the gas-
works, they know how lucky they are.

In front of the wallscreen they sit and stare, it's telling them how
happy they are, telling them to be proud of their coun-
try. Hail king william - former royal baby - a whole
population reflect in his glory.
Girl forget her mask last Sunday, even overtime
couldn't play the hospital. In her condition she was
lucky to make twenty. He agrees to donate her parts
to the organbanks, she'd understand the he needs the
money.

Boy in a mask lost his job at the factory,
something to do with chemical weaponry, now he
can't make payments. The soup vans help but the gas-
works said 'no vacancy' - so he sits outside and
watched the tanks roll out of the factory.


The aftermath of too many wars, the last man in
europe stumbles through the wreckage of somebody's
life, somebody's home,

down the streets that used to
ring with voices now silent. Thick vermillion skies
hang heavy on his back. Through his veins courses
new blood. In his mind a mission.

Underground bunker, last sanctuary of the ruling
body left to maintain law and order in a crisis, a
handful of tanks patrol the area. Civil servants sit at
the nerve centre, monitoring the operation, can't
believe their eyes when the man enters through a
hole he made in a fifteen foot reinforced concrete
wall.

Reduces them to ashes with one fierce radio-
active glance, then turns and heads towards his next
destination.