The Legion of Parasites 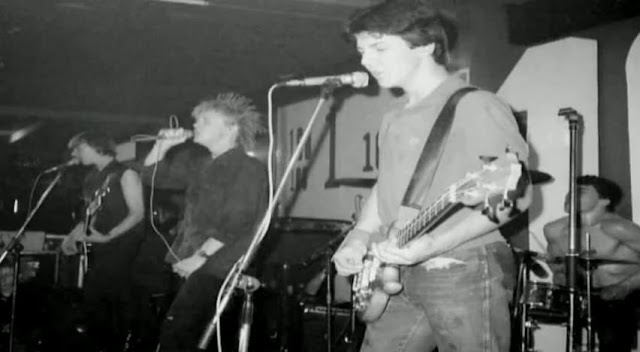 The Legion of Parasites were one of the more thrashier sounding 'Anarcho' bands from the Village of Pavenham, Bedforshire. Some of the members had already been in bands since 1978, but the Legion of Parasites began in 1981 with Cian Houchin(when he was 16) on guitar, Sean Houchin(when he was 17) on vocals and Simon 'Wag' Wagstaff(when he was 14) on drums(he burrowed his sister's drum set). Early influences included the U.K. Subs, Dead Kennedys, Buzzcocks, The Sex Pistols and Sham 69. To practice, they used a shed which was located in Wag's garden. After nine months, they were joined on bass by Scott Hick(age 15). 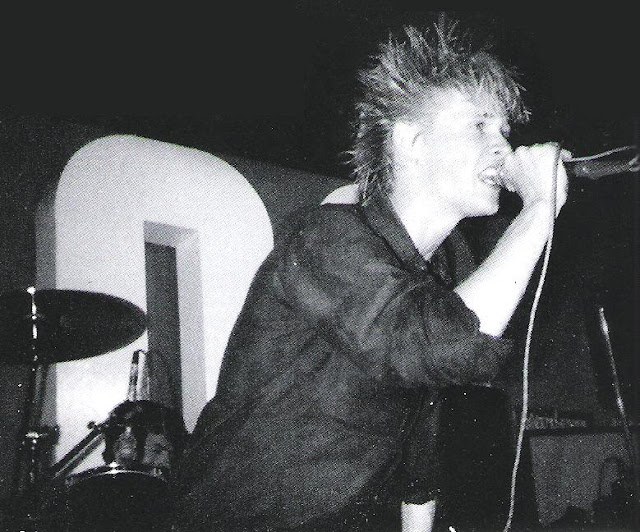 The band wrote their early lyrics about the issues they felt strongly about. However, The quickly realized that the first wave of punk was beginning to sell out, and that the big business men had all these punks on strings for their own profit. This is when the reaction to that came to their attention. Sean managed to get a hold of a copy of Crass's album 'Feeding of the Five Thousand' and once he heard it, he used to just play it over and over again, even though his parents hated the record and wanted him to throw it away due to it's lyrical content. In addition, a couple of America bands such as Bad Brains, Flipper and Black Flag also began to influence them. 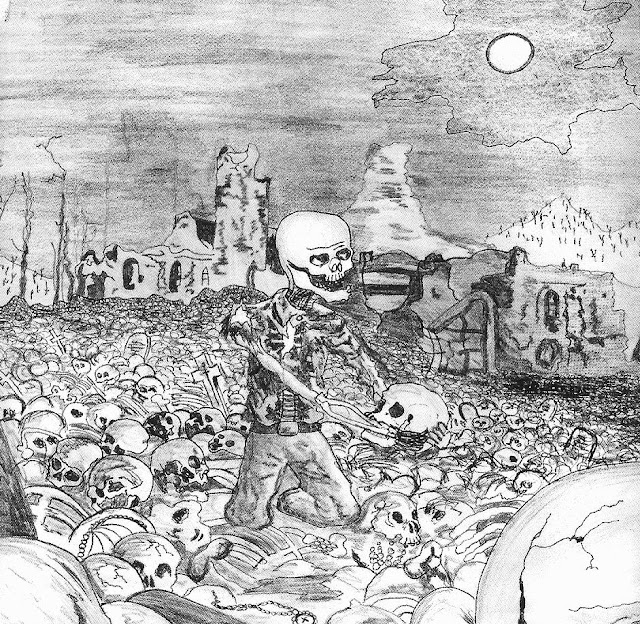 Crass's 'Stations of the Crass' album influenced them the most, and helped spark their political side. The inspiration encouraged the band to record their first seven song demo called 'Another Disaster'(the band picked that name because they felt that is how it began for them) in 1982 which was recorded at Luton's Hero Studios. The cover contained the Argentinean destroyer Belgrano getting destroyed by a British submarine. A second, five song demo was recorded during the Autumn of that same year at Rocksnake Studios, in Rushden, North Beds. Less than a hundred cassettes were made, and sold at gigs. 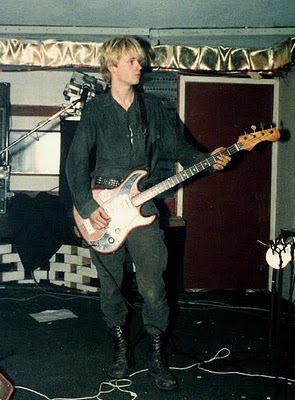 Once Spring came during 1983, the four were joined on guitar by Steve 'Gibbo' Gibbs. Afterwards, two tracks from their second demo titled 'Dying World' and 'Death Watch' were taken with consent for the 1983 compilation record titled 'Gonads Here's the Testicles' on Pax Records. Unfortunately, their second guitarist 'Gibbo' left during the Spring of 1984 to take a different musical direction. 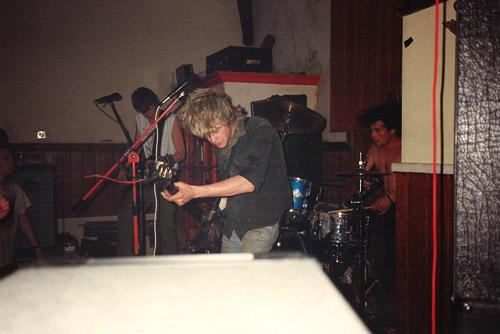 The band continued to distribute their demo out to wider audiences, which led to the tracks 'Death Watch' and 'Promises' appearing in the American compilation 'Compulsory Overtime' on Diesen Records and 'Dying World' alongside 'Boredom' appearing on the 'Empty Skulls Volume Two' compilation record for Fartblossom Records. Next, the band met Digby Pearson(founder of Earache Records) who wrote a bit for them in a Maximum Rock & Roll magazine, and organized gigs at Nottingham's Coalville Social Club, where the band played with Antisect and Mau Maus. 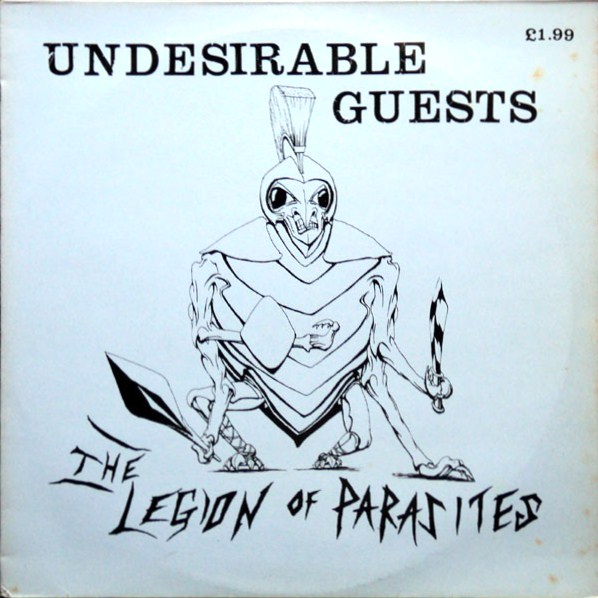 Following the gigs with Antisect, the band decided to record another demo, and the gigs just seemed to pour in. After a show supporting Conflict, Colin Jerwood(Conflict's lead singer) suggested that the band should release an E.P. on the 'just finished' Fight Back label. The band returned to Rocksnake and recorded six tracks that would become the 1984 'Undesirable Guests' 12". However, their founding bassist Scott left after this release, this forced their vocalist Cian to sing and play bass for the band. They were down to a three-piece, but Cian was good enough to cover both tasks, so they followed by recording the song 'Sea of Desecration' for the 'We don't want your Fucking War!' compilation on Fight Back Records, including other bands such as Toxic Waste, Subhumans, Anthrax(U.K. Anthrax, not the metal one), Decadent Few, Stalag 17, Lost Cherrees, Admit your Shit, Instigators and Liberty. 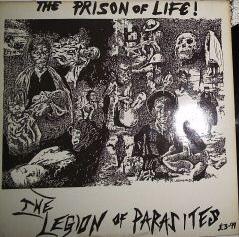 In the Spring of 1985, the band entered the sixteen-track Thatched Cottage studio in Thurleigh to record all the material for their debut album. However, they had no money to pay for it, so they started their own label called Thrash Records and used it right away released their 'The Prison of Life' album. More gigs followed, such as gigs with Amebix, more with Antisect, Subhumans, Concrete Sox, Metal Duck and Chumbawamba. there was also a tour in the Netherlands during 1986, organized by Tony from Dutch punks B.G.K. and another Dutch punk band named God. The band began writing fanzines, and played most of their gigs as benefits for worthy causes such as arrest funds, hunt saboteurs, and anti-vivisection organizations. 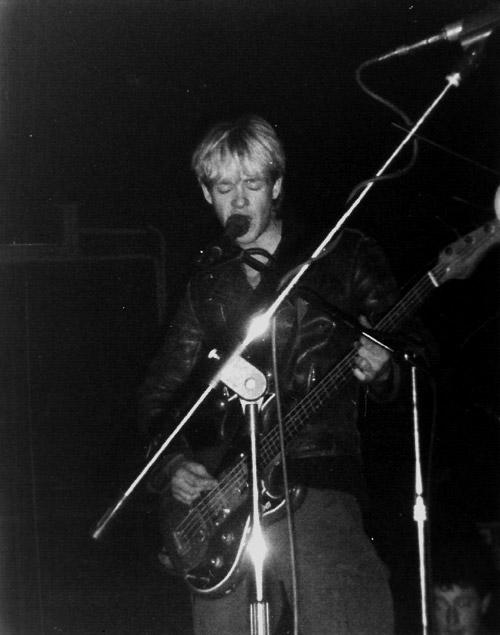 The Legion of Parasites were now at the their best, but the changing scene and drug infested audiences caused the band to question themselves if they should really continue to go on. This led to their demise after their last gig, where the members realized that their drive to keep going on had just about run out. They also noticed that the people around them were beginning to take more interest in the techno and rave scenes, so after the split, Sean and Wag went on to form a dub reggae band called Franticise(they felt that the reggae scene had become more threatening than the punk scene by that time) and Cian joined Stevenage's goth rock band The Nehpilim, followed by another band called 'Saints of Eden'. Wag ended up in another punk related band called 'Sick on the Bus' until he left in 2004 due to family increasing family commitments. Sean eventually dove into the 'drums 'n' bass' scene, and used it to express his anger just as he did before in the Legion of Parasites. 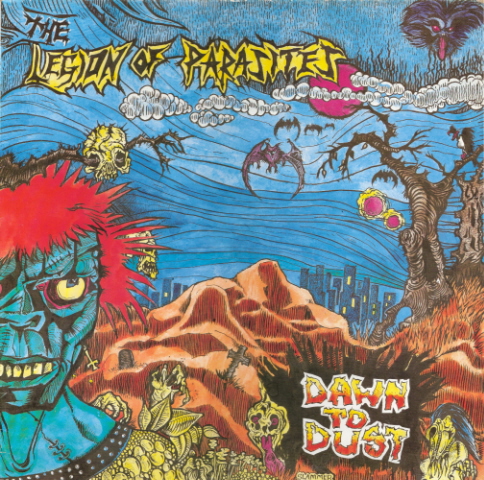 Several more demos and albums were recorded after their first album, such as their lost 'Dawn to Dust' album, but the band never really seemed to be interested in talking about them, and probably sees them as crap. 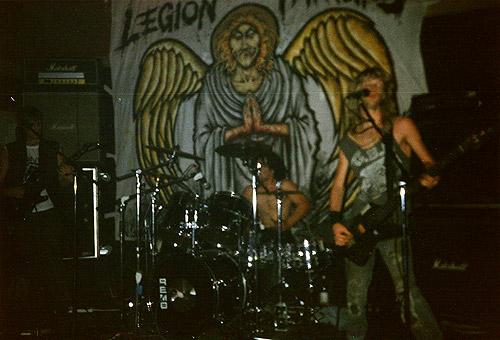 and keep away the forces down to the east
But do we really need all this pretence
To keep the dogs of war behind the fence?

To strive for peace is considered red
But would you rather strive for peace or end up dead?
How many times have you been told
"We must smash this Government's bloody hold"
Unless we think of a way that is sane
It will end up being us that suffers the pain

Pain of war, pain of death, radiation or hunger, or the initial blast?

Soon to come Downloads:
Another Disaster Demo 1982
Second demo 1982
Undesirable Guests 1984 Fight Back
The Prison of Life 1985 Thrash Records
(I know there are a lot more demos and albums, but these are the most relevant and critical to the band's history)
Posted by Listen and Understand at 10:53 PM