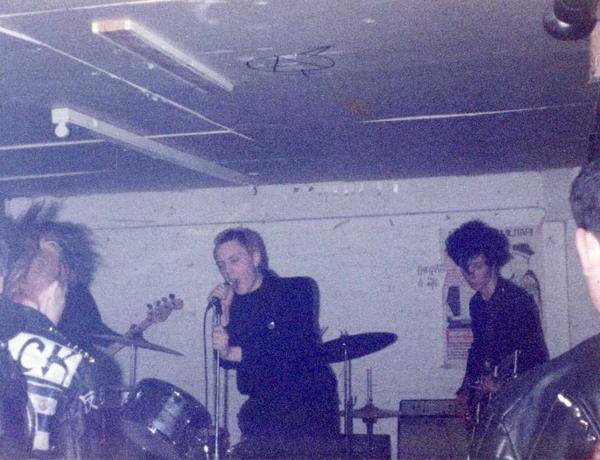 Alongside Rudimentary Peni, Part 1 also shared a similar interest in death, horror and anti religion, played several gigs with them, had a much more slower, darker sound than Nick's band, but disappeared almost as soon as they started. Some note that Part 1 was part of the beginning of goth-punk since they believed and acted out actions which were considered 'goth' before the 'goth' label was born. Before Part 1 was formed, their drummer Bob already had a band up and running called 'The Bleeding Lips' which released a tape, and their guitarist Mark started out in a band called 'The Urban Guerrillas' with Sean Finnis. Sean, Mark and Bob eventually joined together with another friend to form 'Matt Vinyl and the Emulsions', but Sean and Mark left to start several other bands such as The Snipers(not the same Snipers from this blog). In the end, Sean left to form Exit-Stance(same Exit-Stance from this blog), while guitarist Mark Farelli and drummer Bob Leith  formed Part 1 with Chris Baker on vocals and Chris Pascoe on bass. 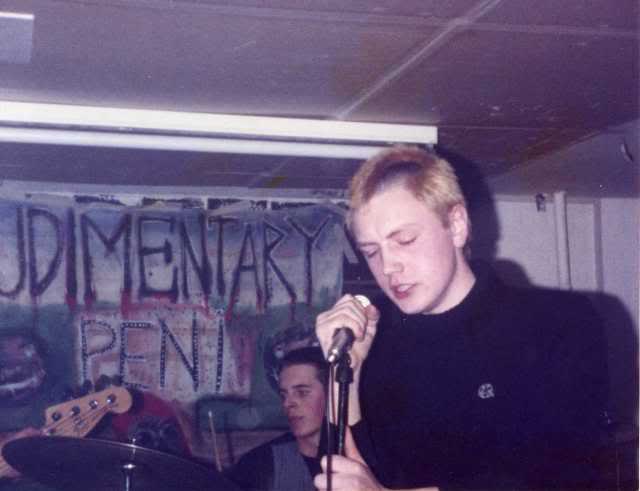 Some members from the band were influenced by Crass's strong anti-religious works, Public Image, Santana, Killing Joke, Bauhaus and U.K. Decay. Can's long experimental songs and the sound of the flanger(a kind of guitar pedal) used in Siouxsie and the Banshees by John Mckay also played a key role in the sound that Part 1 developed. Their first gig was during October of 1980, at Bletchley's Compass Club, supporting the Flying Ducks. They played their second gig at the Peartree Bridge Centre with an early version of Exit-Stance called Ethnic Minority. During January of 1981, Part 1 recorded their first demo at The Crypt in Stevenage(the basement of an abondoned church), and a copy of the demo was sent to Crass which led to them choosing 'Marching Orders' to be included in Bullshit Detector 2, but by that time Mark disliked the song and asked them to not include it. 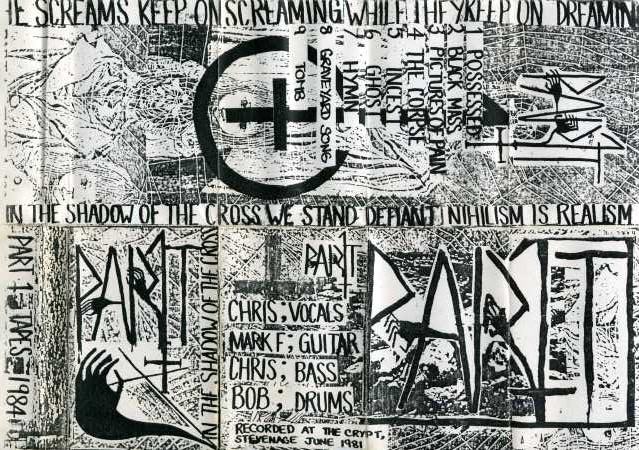 Their second demo titled 'In the Shadow of the Cross' was recorded during Spring of that same year, at the same place. This caught the attention of Andy Martin from the Apostles, which led to the band getting invited to play a gig by him with Dirt, The Sinyx, and The Chronic Outbursts, but Part 1 ended up not playing. Two gig dates later on Halloween of that same year, the band was meant to play with the Apostles, but the band ended up getting chased away with shovels and pickaxes resulting from a fight between punks and football fans. The band was also known for their disturbing art which was provided by Mark. 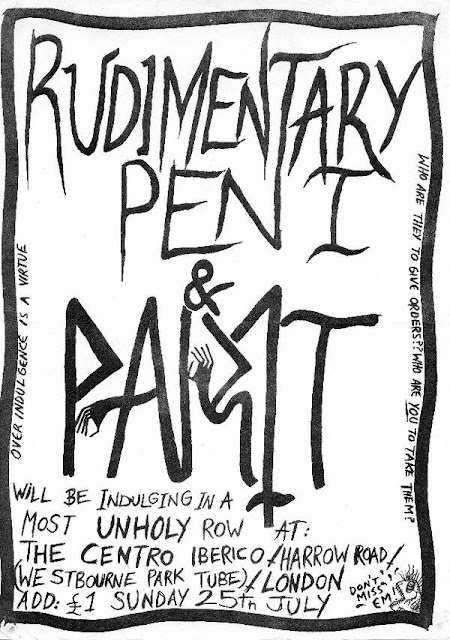 Eventually, Part 1 ended up playing one of their best gigs at the Wapping Anarchy Centre in London during 1982, on January 27th, with The Apostles, Blood and Roses and Witches. They ended up liking it so much that they decided to include it in copies of their 'In the Shadow of the Cross' demo tapes. Soon after, Mark Farelli met Nick Blinko from Rudimentary Peni, and their morbid similarities resulted in a close friendship between the two bands, which led to them playing several gigs together at the Anarchy centre and the Centro Iberico. It was actually Mark that introduced Nick to H.P. Lovecraft, so we can thank him for helping with the creation of Rudimentary Peni's 'Cacophony' album. 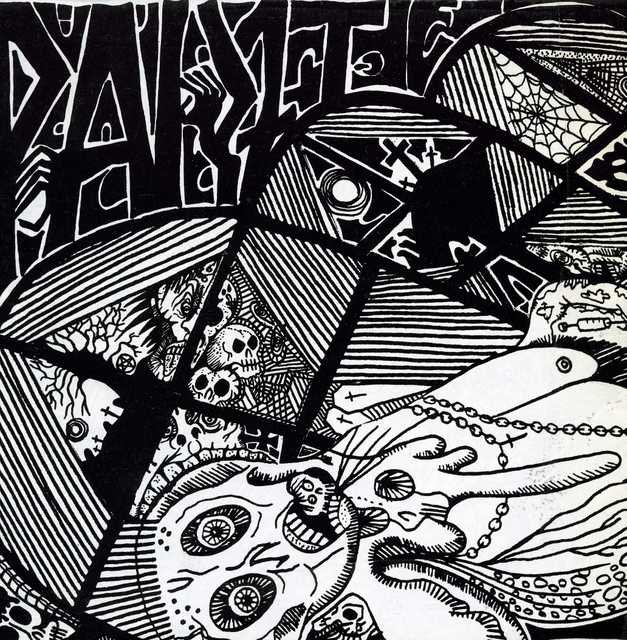 During May of 1982, Part 1 entered Octopus Studios in Cambridge with financial help from Nick Blinko to cover the expenses. Nick gave them £150 from the money made out of Rudimentary Peni's 'Farce' single on Crass Records, so they could record their first E.P. Once the final product was finalized, Part 1 released their excellent 'Funeral Parade' E.P. during October of 1982. Grant and Nick from Rudimentary Peni decided to continue helping the band by sending copies of the E.P. to Small Wonder and Rough Trade(eventually, the two bands went their separate ways, which may have had had something to do with Nick and Mark's competitive Lovecraft obsessions, or wanting to relocate). However, vocalist Chris Baker left in December of 1982 and ultimately disappeared, forcing Mark to playing guitar and sing. 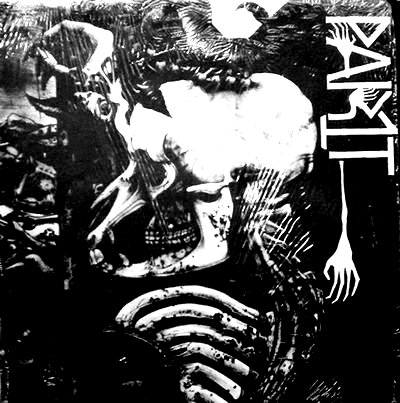 Nick eventually gave a copy to Brian 'Pushead' Schroeder, vocalist for the U.S. thrashcore band, Septic Death, who ended up releasing 'In the Shadows of the Cross' as the 'Pictures of Pain' L.P. in 1984, on his Pusmort Records label without the versions of 'Graveyard Song' and 'Tomb' that were in it. He also included the track 'The Black Mass' in his 'Cleanse the Bacteria' compilation. In addition, the back cover of the L.P. features artwork by Nick Blinko. Unfortunately, They played their last show without even knowing it in April of 1983, supporting the Subhumans at Oxford Street's 100 Club. 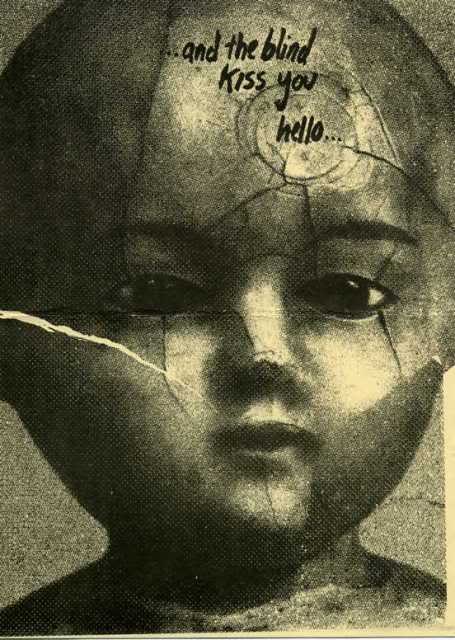 After the gig, their van broke down, and the band members got into a horrible argument. This ultimately led to the split. Afterwards, Bob decided to join The Snails, followed by A.T.V. and finally The Cardiacs. As for Mark, he went to St. Martin's School of Art and became a worker in a second-hand bookshop, as well as a Victorian magic lantern performer. 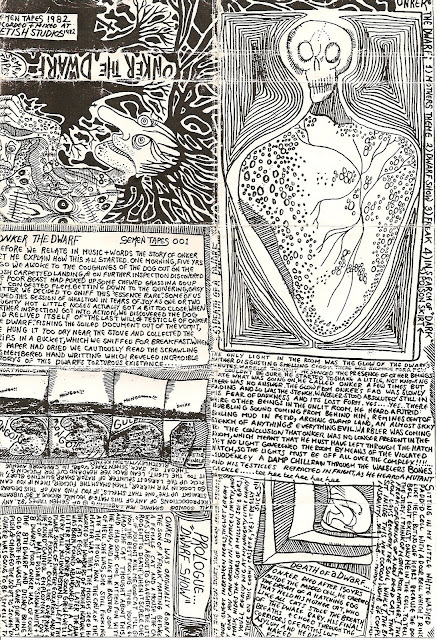 Fortunately, the band is planning to release a six CD retrospective package very soon. Also, rumors of them playing this year with The Mob went around, but the gig never happened. However, according to the band, several of their best songs were written during the end of their time when they were a three-piece without Chris, but sadly none of it was ever recorded properly. Part 1 has recently reformed and hopes to record that material. 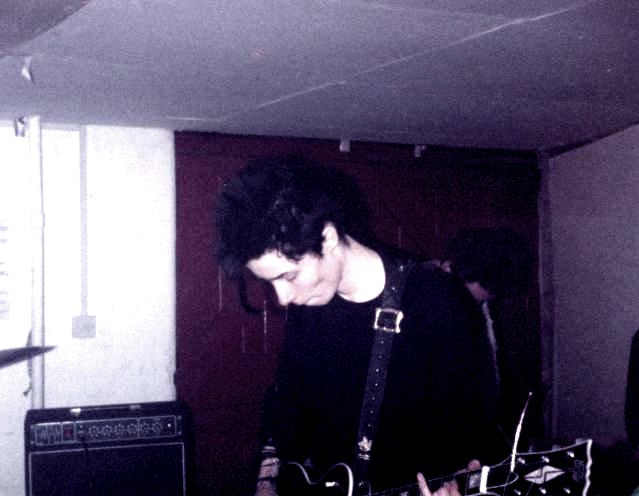 
The black sky dense with death,
is bleeding down your drain,
your screams + shouts are distorted,
by the pouring of the rain,
your doubts are flooding in,
like your drowning in the sea,
your final rights are spoken,
this silence cannot be,
your coffin drops into your grave,
but the dead are alive.
You're clawing at your wooden tomb,
but how will you survive?
Your fears are confirmed,
as the soil is shovelled in,
you're being buried alive,
to the tune of a christian hymn.

The sermons & the preaching
mean nothing when you're dead.
The worms in your coffin,
will not fill your mouth with bread.
Christian believer,
you've filled your head with shit.
There's nothing left for you,
save the slime of the death pit.
There's no glistening heaven,
in the centre of the skies.
Your stupid fucking bible
is a book filled with lies.
Your crucifix was just two sticks,
on which some figure hung,
surrounded by filth,
in the cesspool the death bell rung. 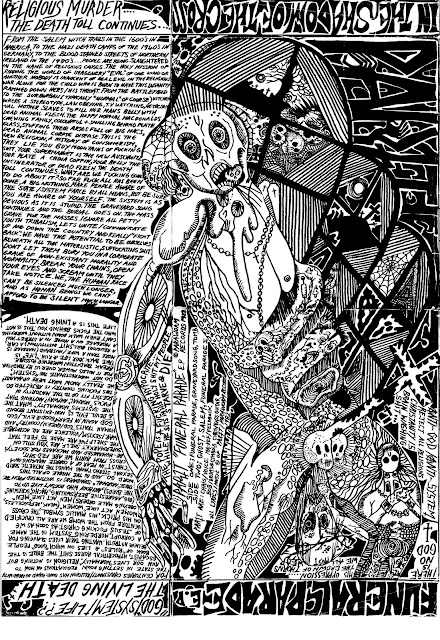 (Click image to enlarge, then read it!)
"Tomb"
A last disturbing thought,
as darkness covers your eyes,
to be encased in a burial chamber
for your second life.
You were a nobody in the other world
you didn't stand a chance.
Now the time has come to live again,
in a catolinic trance.
I'm in a tunnel and it's closing in.
I am the visage in the loony bin.
They strap me up in their corridors
and sedate me to their one armed applause.
Paint me in white washed blessed obscenity,
so I fit in with the shitty scenery,
thoughts are concealed with my talons and swords,
while they tell me stories in my sterilized ward,
I feel the needle, the flick knife to my vein,
camouflaged horrors set deep down in my brain,
I feel drips of water, splashing onto my head.
They watch & they laugh as I writhe until i'm dead. 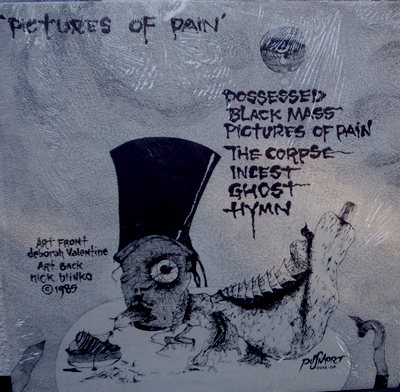 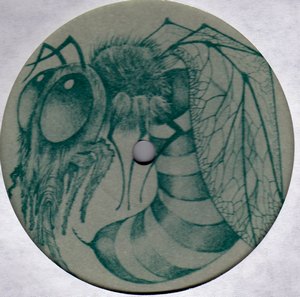 thrown into the dark,
the screams of those burning
deep within the past,
to free themselves from the unholy purge,
they gave their god
charred flesh + bone,
to free their minds from doubt & guilt,
they gave their souls
the right to kill.
They screamed Christ's dead,
in the burial of shadows,
they screamed for
freedom,
but were silenced with the taste

of fucking fire
Salem burns in fierce fire burn,
crucifix lies in the mud to late to learn,
Scarred images
thrown into the dark,
the screams of those burning
deep within the past,
to free themselves from the unholy purge,
they gave their god
charred flesh + bone,
to free their minds from doubt & guilt,
they gave their souls
the right to kill.
They screamed Christ's dead,
in the burial of shadows,
they screamed for
freedom,
but were silenced with the taste
of fucking fire.
Victims of circumstance
or victims of some lost age,
I'm telling you they'll do it again were nearly in the cage.
From a fairy tale
comes a nightmare
though shalt not kill but you've his clearance to burn,
fear of the unknown gave birth to morality
Morality turned to slaughter
insane broken justice,
justice born from fire,
fire lit by fools.
Fire burning justice,
justice born from lies.
All your protectors,
protectors of some faith,
gave yourselves some scapegoats
burned in Christs clean breath.
One day they'll realize
the injustice of those lies,
but charred flesh cannot be given life taken by your lies. 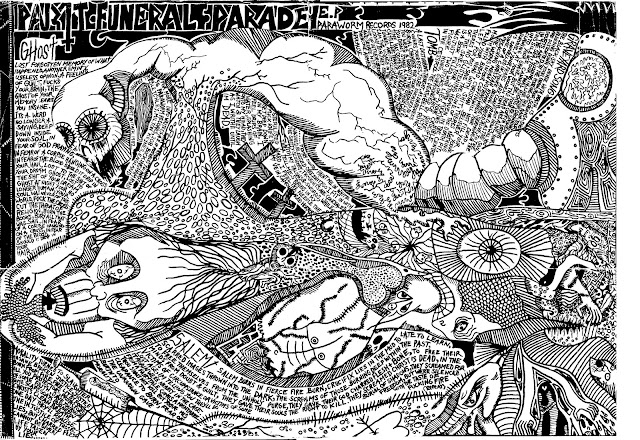