In 1980, The Lethal Objects and the Atomz joined together as a five-piece and named themselves The System. Jimi, Jan, Maki, Andy and Spider played their first gigs in a car park. At one gig there, they caused an outrage when the played during Prince Charles and Lady Di's wedding day, but where stopped halfway through their set by police. Once The System heard "The Feeding of the 5000" they met up with Crass and began playing gigs with them. 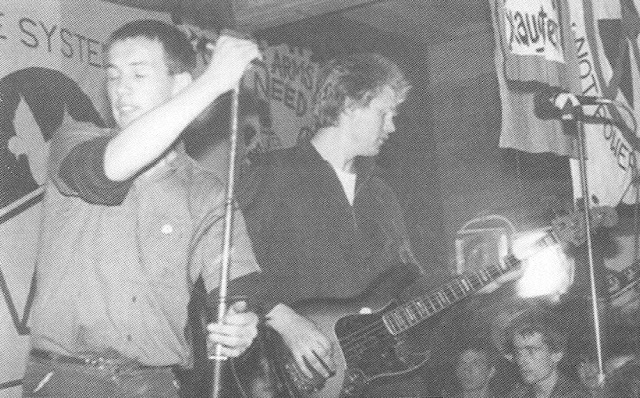 Further connections with Flux of Pink Indians led to The System playing their first real show at Sheffield's Marples on 7th September, 1981. Flux of Pink Indians were so impressed that they helped the System release their first two singles on their label Spiderleg records. Marcus Featherby, promoter at Marples and head of Pax records, was impressed with the band and asked them if he could include their song "Their Decisions" in his anti-war compilation "Wargasm".

Their debut E.P. "Dogs of War" was going to originally be released on Crass's label, but Spiderleg insisted, releasing it in April on 1982. It became a success, and was followed by their E.P. "The System is Murder" later that year.


Flux of Pink Indians and The System toured nationally in April of 1983 to promote it(Gigs were going to be played in Europe, but Dick Lucas who was in charge of those gigs was hit by a bus, cancelling the gigs). 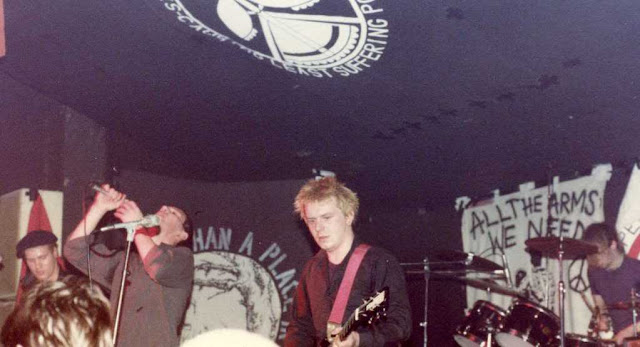 The system played around 60 gigs and traveled from Inverness(on that night they slept over a fans croft home, in the middle of nowhere) to Aberdeen. At one gig, Crass came by surprise and asked them if they could burrow their equipment to play at the Triad in Bishops Stortford, Essex, to support them in the summer of 1982. 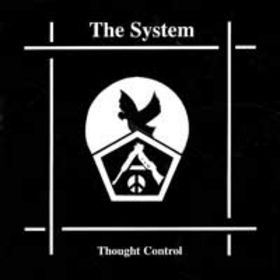 The band had an interesting way of making music, seeing as they did not have a practice room. Jimi the bass player wrote most of the songs and Andy would add his bits on guitar. Afterwards, they would all work together on the their songs during sound checks and play them on those nights at gigs. "Struggling" is a song that was created that way, and is featured in their album"Thought Control" released on the German label Skuld Records. 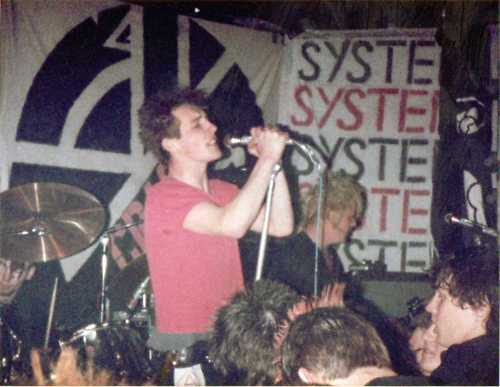 The System split in November 1983, after vocalist Ian decided to leave.Andy(guitar), Jimi(bass and vocals) and Spider(drums) reformed in 1986 as Fear of Music, wrote new material, played old System songs, recorded a live set at Wigan Transport Club on 27th June 1986 but split again around the end of the year.

In 1998, The System reformed for a Mclibel Benefit gig. Dick Lucas from the Subhumans and Jon from Active Distribution organised it. They played at London University on the 16th and 17th of June.

They helped raise money for legal costs, for a couple of activists whom Mcdonalds had sued for exposing their environmental damage from deforestation. They played alongside Zounds, The Subhumans and Omega Tribe.

However, their vocalist Ian did not show up, as he was planning to move to New Zealand, so they had to move Jimi from Bass to vocals, have Maki, their original second guitarist play bass, have Andy and Simon play guitar and Bri(from Wigan band ACAB) play drums. After that gig, the System disappeared forever. In 2006, their drummer Spider passed away. 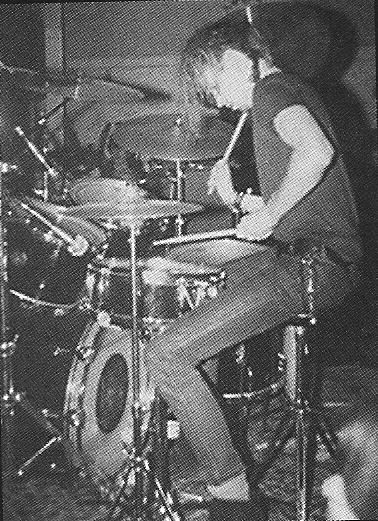 What will happen to the country when it starts
warheads, atom bombs dropping with the rain
giving the war dogs another fucking game
just like the Japanese they had to sit there when it came
don't think you'll get away with
because you've got a famous name
chemical warfare doesn't want to know your fame!

you'll end up a pile of ashes of fertilizing fields
miles of devastation to match your needs
the war dogs look around them and say it had to be done
to perverse the human race
it wasn't just for fun
well we don't want a part in your mindless little games
because a four minute warning just isn't playing fair!!

The dogs of war are starting with their game
warfare,warfare! it will always be the same
the dogs of war don't even know your name
who gives a fuck they'll destroy you anyway!
Who's fucking war?

They say your bad