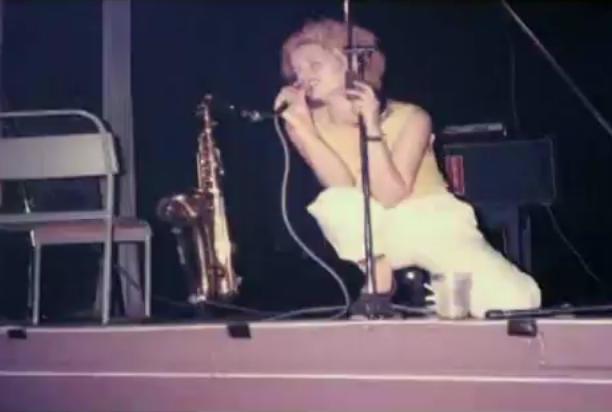 After leaving Sanction, Heff moved and joined her friend Al to start a much more personal anarcho-feminist band called Toxic Shock. The duo were Heather 'Heff' Joyce on saxophone and vocals, and Alice 'Al' Marsh on bass and vocals. That was the only line-up and it managed to create a really unique and original sound. However, they claim that before the band got serious they started out as a joke to play songs at a disco, and that the name had no real meaning behind it, until they decided to use it to describe the effect their performances had on the audience. Both women were vegans, Heff helped out with the Catalyst zine and their ideas were a much more extreme version of what Bikini Kill and the Riot Grrrl movement were about. 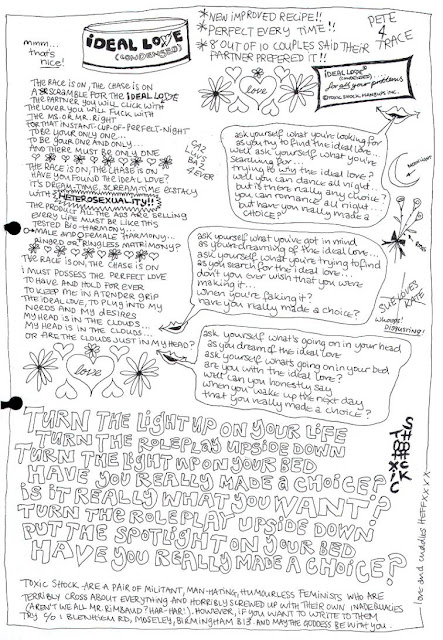 They were based in Greenham Common and were heavily influenced by Poison Girls, which ultimately led to the two bands playing several gigs together. Toxic Shock helped to talk sense and expose the truth in regards to women's rights and equality with men. The band even had all girl audiences on purpose sometimes for better results. 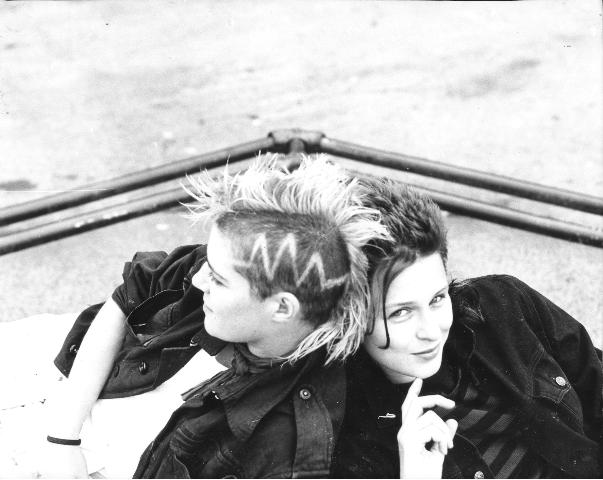 People were often taken by surprise to their unique approach which sort of sounded like a mix of punk, funk, poems, jazz and blues, and their audiences often reacted in a positive, supportive manner. Sexist men would sometimes get in their way, but the band kept their belief that women and men could live as equals. They didn't hate men, and encouraged them to think through a feminists point of view. 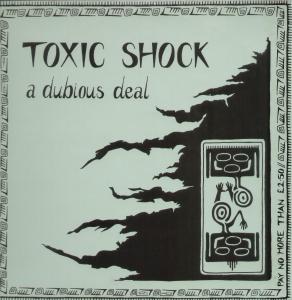 In 1984, the band appeared in the Who? What? Why? When? Where? compilation with their song 'Remote Control'  featuring several other of the anarchist punk bands. That same year, the band jumped onto Vindaloo Records to release their 'Dubious Deal' 12" . They would start off strong by touring with Poison Girls, and even managed to gig with bands such as Omega Tribe, Conflict, The Nightingales and High Alliance. Their lyrics would often cover sexuality, women's insecurities, love, and also topics regarding politics, police systems and animal liberation. 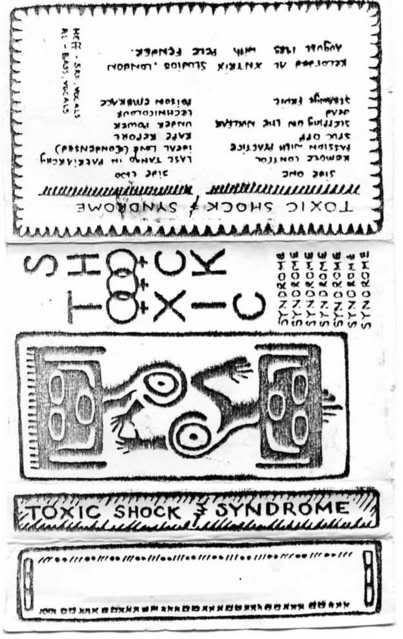 In 1985, the band released a tape called 'Syndrome' on the Poison Girl's Xntrix label. A second 12" named 'Just Another Day' was also released in 1985, and a double compilation L.P. called 'Communicate!!!! Live at Thames Poly' also featured one of their songs.Sadly, sometime during 1985, personal issues between the two members caused the band to split. Heather currently continues to write music on her own. To get a good idea of what Toxic Shock were about, I would suggest reading the handout above(click to enlarge) and the lyrics to 'Resistance' below which was written by Al.

"Resistance"
One way of doing things.
Turning an alternative into the alternative.
We all think this.
We all do that.
Building our own circle of security.
Back to the womb.
I don't want to live in an alternative ghetto.
I wan't to live in an an alternative world.
Out, out.
Falling in love
is supposed to answer all your problems.
One day your prince will come and that will be that.
So you spend your life waiting,
but no-one ever talks about the happy ever after.
Over the hills and far away.
To a paradise just for two.
Back to the womb.
I don't want to languish in your arms forever.
I want to linger in our arms for tonight.
And tomorrow we'll have to wake up.
And tomorrow we'll have to get up.
And use the love we've stumbled on.
Love as the reason to go on feeling.
Love as the reason to go on fighting the fear.
Love as the reason to go on making choices.
Love as the spur to resistance.
RESISTANCE! RESISTANCE! RESISTANCE!
More lyrics coming soon!
Soon to come downloads:
Dubious Deal 1984 Vindaloo Records(I don't have the technology to get MP3 files from the record)
Syndrome 1985 Xntrix(incomplete)
http://www.box.com/s/0ydgxjp4vq5rca275vyb
Unknown songs 198X
http://www.box.com/s/x20czav07vuuyqu2smz4
Posted by Listen and Understand at 7:53 AM